Designed to regulate up to 40,500 m³ of storm water and prevent sewage outfalls in the River Ribble, the Preston Sewage Interceptor Tunnel was part of a wider system of tunnels, rising mains and pumping stations proposed under United Utilities’ UID (Unsatisfactory Intermittent Discharge) scheme.

When one of two tunnels being driven beneath the River Ribble was flooded with the complete
loss of a full face tunnelling machine, however, the project was halted while engineers assessed
ground conditions decided how best to proceed.

After a considerable delay, a state of the art Herrenknecht rapid pipe-jacking system was brought in to drive two new shafts beneath the river. Crucial to the success of this phase of the project was the availability of sufficient tunnelling grout to safely secure and backfill each tunnel section as it was pushed into place.

The Herrenknecht system is capable of driving over 70m in a single shift, so contractors turned to Pozament to guarantee bulk delivery in the volumes that would sustain progress.

Over the following three months, Pozament made regular bulk deliveries to sites where access and offloading were often a challenge, while tailoring loads to meet anticipated needs.

As Pozament Commercial Manager Duncan Haywood explains, “With such a variety of substrates from sand, silt and gravel to Sherwood Sandstone, progress varied from day to day. Tailoring volumes to meet peaks and troughs in demand meant there was less waste and less requirement for bulk storage on site.”

With Pozament’s help, tunnelling teams broke through on the main interceptor tunnel on schedule in early March 2013. 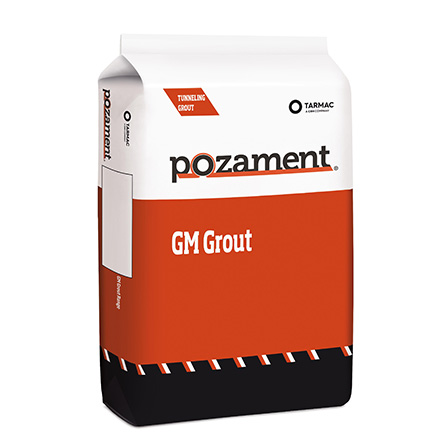